From Wrangler to Whiskey 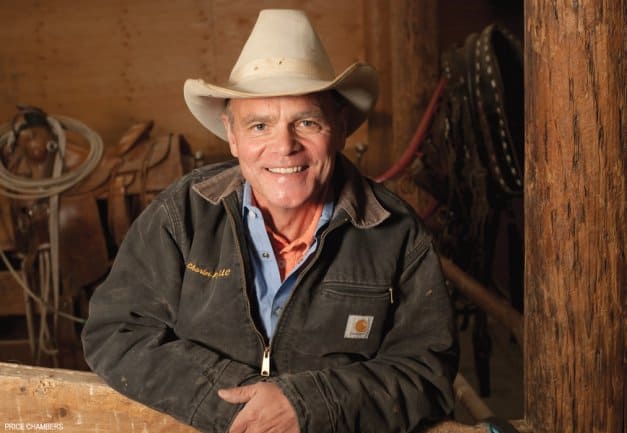 An attorney—he shares a practice with wife Kate—and rancher, Brad Mead is the grandson of former U.S. Senator and Wyoming Governor Clifford Hansen, and the older brother of Wyoming’s current governor, Matt Mead. He once ran for Justice of the Peace, but today, Brad’s happier to talk about Wyoming Whiskey, the distillery he founded with Kate and fellow Jackson attorney David DeFazio, than politics.

Four hours away in Kirby, Wyoming (pop. 92), Wyoming Whiskey is the first legal distillery in the state’s history—and the state’s first whiskey suitable for doing anything other than starting campfires. Not that Mead, who grew up on the same Spring Gulch Ranch he now operates, would ever give up cattle.

Q: Did it ever cross your mind to live anywhere but Jackson?

A: When Kate and I graduated from law school, we decided we wanted to get jobs where no one knew us. We’d visited Phoenix a couple of times and thought that’d be a good place to be for a while. It ended up being eight years. Both of our kids were born there; we came back when the oldest was getting ready to start school.

Q: How was it different for your kids growing up here than it was for you?

A: Growing up, the kids I associated with were predominantly ranch kids. And I thought that was how everyone grew up. When my boys went to school, very few kids in Jackson were ranch kids. They recognized an immediate difference between how their family made a living and how other families did. And they far more quickly appreciated how lucky they were than I did.

Q: You’ve been ranching, or watching your family ranch, in this valley for over fifty years. How has it changed?

A: When I was young, ranching was really kind of a common pursuit in the valley, and it’s not so common now. There are more rational things you can do with an asset of land in Teton County than raise cows on it.

Q: As much as Wyoming can have this, your family is kind of like our Kennedys. Do you feel any pressure with the Hansen/Mead name?

A: I don’t really think there’s any pressure. I think people in Wyoming judge everybody based on that person’s own merits. Still, when Kate and I were just getting started, we didn’t want to be hired because someone knew my family.

Q: When did it dawn on you who your grandfather was and what he actually did?

A: Not until he was elected governor. I was in the second or third grade, and pretty unhappy about he and my
grandmother moving to Cheyenne. I did come to like visiting the governor’s mansion. It had a multistory laundry chute I sent Matt down. He survived, but must have been knocked on the head. Why else would he run for office?

Q: How’d you go from ranching to making bourbon?

A: We started pasturing our cattle in Kirby. Grains grow around there. And then we lucked out in two huge respects: It turns out the water is more than perfect, and we convinced Steve and Donna Nally (Steve is a Kentucky Bourbon Hall of Famer) to move here.

Q: After aging for four years, Wyoming Whiskey launched December 1. How was the wait?

A: I’ve thought it was good for quite a while. It is Steve’s baby, and the changes that he’s waited for—and now gotten—are pretty small for my palate, but they were important to him.