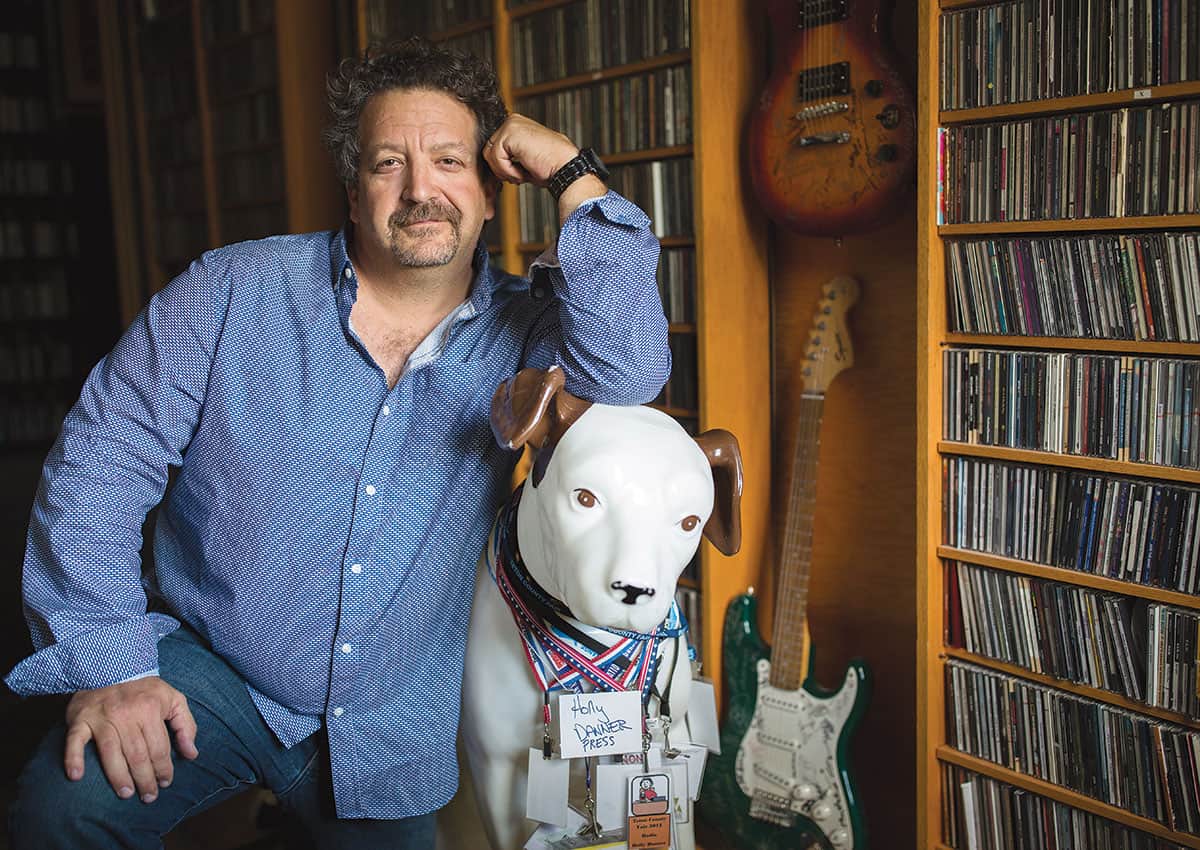 IN 1989, MARK “Fish” Fishman moved to Jackson Hole for one winter. The plan was to then return home to Atlanta, marry his college girlfriend, and eventually join the restaurant world or maybe work for CNN. “But I wasn’t going to be an on-air guy,” he says. Fish is still here, though, and he is on the air. For twenty-eight years his voice has been a constant at KMTN (96.9 FM). He started at the radio station—he did the overnight shift the same day he was hired, which was also the same day he interviewed for the job—within several months of moving to the valley. Then he did afternoons for several years while working in different restaurants. (At one point, he was assistant food and beverage manager at Spring Creek Ranch.) In 1996, Fish, now fifty, became the station’s program director and switched to doing the weekday morning show, which includes the iconic Trash and Treasure segment, where listeners can call and sell almost anything. Last August, his peers across the country awarded him the Program Director of the Year Award for markets fifty-plus in the AAA (Adult Album Alternative) format.

Q: How long has “Fish” been a thing?
A: The earliest I remember being called Fish by everyone was third grade. And then in 1979, my mom remarried, to a guy named Mark. So from that point, the family always called me Fish. In the high school paper I had a column called “Fish Schtick.”

Q: Is the Fish on the radio today a schtick?
A: I’m always just being me, and I often get the comment from people when they meet me, “Oh, you’re just like you are on the radio.” I think listeners like being talked to, not talked at.

Q: How do you find new music?
A: I sit in my office and take calls from industry people twice a week. I also communicate with other programmers around the country and listen to other radio stations. Mia [his oldest daughter, twelve] sometimes tells me I need to check out a song or band.

Q: Her recommendations go beyond Taylor Swift and One Direction?
A: Lots of her friends listen to pop, and Mia likes The Lumineers and Michael Franti. One of my proudest father moments, musically speaking, was seeing Mia sitting on the dining room table listening to a CD and reading the liner notes. I think this generation misses the album art and liner notes.

Q: Out of all this new music, how do you know what you want played on KMTN?
A: I program with my heart, my ears, and with the knowledge of the community. Nowadays, with big stations, it is all about analytics—a PD could be in Dallas and have no idea what’s going on in the community. We’re lucky we’ve been smaller owned forever. Rich Broadcasting is the fourth owner I’ve been under. I can play bands that are coming here, or have the potential to come.

Q: Such as?
A: Nathaniel Rateliff & The Night Sweats. We’re playing the Marcus King Band, and I hope to see them at one of the outdoor concerts next summer.

Q: Do you like to stretch people’s taste?
A: I look at it like a menu for a restaurant. We serve a little bit of everything. I might not like all of the artists we play on KMTN personally, but it is not about me. This is such a melting-pot community. I try to program as a music lover.

Q: How do you know you’re getting it right?
A: Someone stops me and thanks me for introducing them to a band.